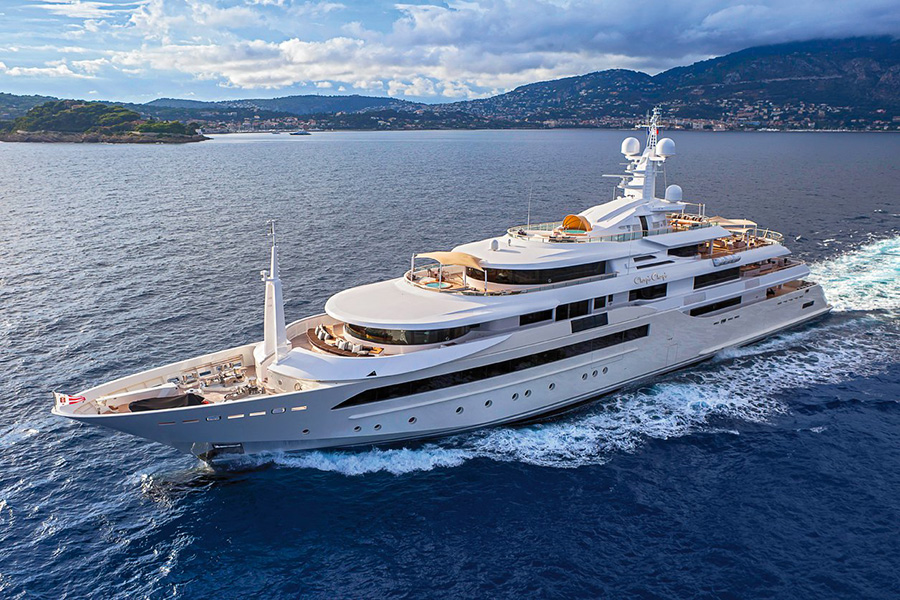 5th May 2014 – CRN, part of the Ferretti Group and specialising in the construction of fully-customized megayachts, made of steel and aluminium, from 40 to 90 metres, with its flagship, M/Y Chopi Chopi 80 mt, has been honored with the prestigious award “Judges Commendation” dedicated to the largest displacement motoryacht of 2,000 GT and above at “The World Superyachts Awards”, organized by the editorial group Boat International Media.

Against the splendid backdrop of the National Maritime Museum in Amsterdam, after a two-day event dedicated to the Superyachts Industry and its Excellence, M/Y Chopi Chopi was awarded a prize. The award was received by Lamberto Tacoli, Chairman and CEO of CRN together with the Team of CRN and the architectural firms Zuccon International Project, which created the exterior profile and interior layout and Laura Sessa, who was responsible for the stylistic concepts and interior design, in front of an international audience of Owners and representatives of the most prestigious shipyards in the world.

After having won the “Interior Design Award” for megayachts over 60 metres at the “Showboats Design Awards”, M/Y Chopi Chopi has also won the special prize which the jury of “The World Superyachts Awards” reserves for the megayacht which has stood out from the rest on the world yachting scene in 2013 for characteristics, innovations, design and onboard technology, distinguishing features that allowed this vessel, totally Made in Italy, to captivate the Owner’s family and to win the coveted prize.

Lamberto Tacoli, Chairman and CEO of CRN, comments: “This new, unexpected and prestigious award for Chopi Chopi, our flagship, is the reward for the work undertaken by all the CRN shipyard, in close collaboration with the Owner and the architects Laura Sessa, Giovanni and Paola Zuccon, not forgetting our shareholder Weichai Group and our friend Alain Maaraui of SeaPros; my personal thank you goes to all of them, once again. Chopi Chopi, in addition to perfectly representing the commitment and the passion that have characterized the shipyard of Ancona for 50 years, brings prestige to our Italian Nautical Scene and will be a great stimulus for continuing our fascinating and demanding work”.

Hull number 129 built by the shipyard, at a staggering 80 metres, is the largest megayacht ever built by CRN and one of the biggest ever produced in Italy. Chopi Chopi is a grand showcase of Italian quality, having been fully constructed in Ancona and designed by two Italian architectural firms: Studio Zucconi International Project, which created the exterior profile and interior layout together with CRN Engineering, and architect Laura Sessa, who was responsible for the stylistic concepts and interior design. Chopi Chopi is a steel and aluminium displacement hull megayacht with 6 decks that can host up to 12 guests in six suites, 30 crew members and nine staff.

Conceived as a family house, Chopi Chopi represents a synthesis and, at the same time, an evolution with the characteristic features, the soul and the innovations of a vessel branded CRN, which stands out for its spectacular volumes, the airiness of its spaces, its slender structures and its soft lines, the attention given to detail and well-being onboard, the play of lights and, above all, the more direct contact with the sea.
As with every vessel produced by the shipyard, the new flagship fully embodies CRN’s strengths: the balconies and open terraces in the VIP cabins on the main deck, the beach club on the lower deck with the stern hatch that turns into a 100sq metre beach overlooking the water and the wide windows, which allow light to flood into the interiors, thus granting constant eye-contact with the sea. Moreover, the Chopi Chopi megayacht features some particular innovative solutions, such as the avant-garde pilot house – sporting the characteristic round shape – and an exclusive space for the Owner, with a deck entirely devoted to him, located between the upper and sun deck, where he can enjoy cruising in maximum privacy and which can also be reached thanks to a helipad located at the stern.